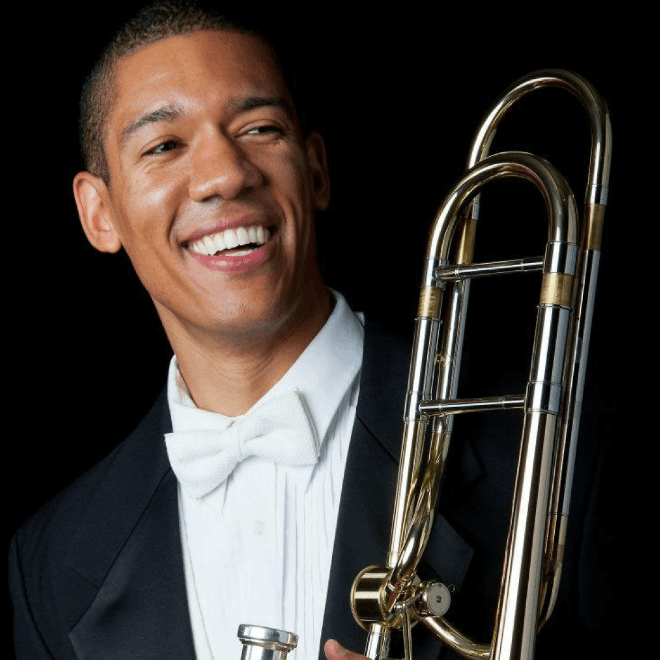 Weston Sprott has been a member of New York’s Metropolitan Opera Orchestra since 2005, and has performed with the Philadelphia Orchestra, the New York Philharmonic, Atlanta Symphony, and Oslo Philharmonic, among others.Sprott previously held principal positions with the Pennsylvania Ballet Orchestra and the Delaware Symphony Orchestra. His chamber music engagements include performances with the Stellenbosch International Chamber Music Fesitval (SICMF), 92nd Street Y, and Great Mountains Music Festival.

As a soloist, Sprott has been featured regularly throughout the United States, Europe, South Africa, and Asia. He made his Carnegie solo debut performing Lars-Erik Larsson’s Concertino for Trombone in 2007. His debut album, Act I, was released in 2010 and hailed by the American Record Guide as “an outstanding recording” that “feels the emotion of every note and phrase.”

Sprott has appeared in Ben Niles’ documentary film Some Kind of Spark, which highlights the impact of music education in the lives of students as they attend Juilliard’s Music Advancement Program. Other documentary film credits include A Wayfarer's Journey: Listening to Mahler, and Rittenhouse Square. He is also quoted in Yankees star Bernie Williams’s Rhythms of the Game. Sprott volunteers regularly with organizations like Play On Philly and Music Kitchen, and has sponsored educational opportunities and solicited instrument donations for disadvantaged students. His philanthropic spirit was recognized in an article by the Wall Street Journal. Sprott maintains teaching studios at several New York area institutions, and serves on the faculty of SICMF and the Curtis Institute of Music’s Summerfest.
Sprott is an artist/clinician for the Antoine Courtois Instrument Company. He performs exclusively on Courtois trombones and plays the Legend AC420BHW “Weston Sprott Model” trombone. Performances and interviews with Sprott have been seen and heard on PBS' Great Performances, NPR's Performance Today, MSNBC, and Sirius Satellite Radio.