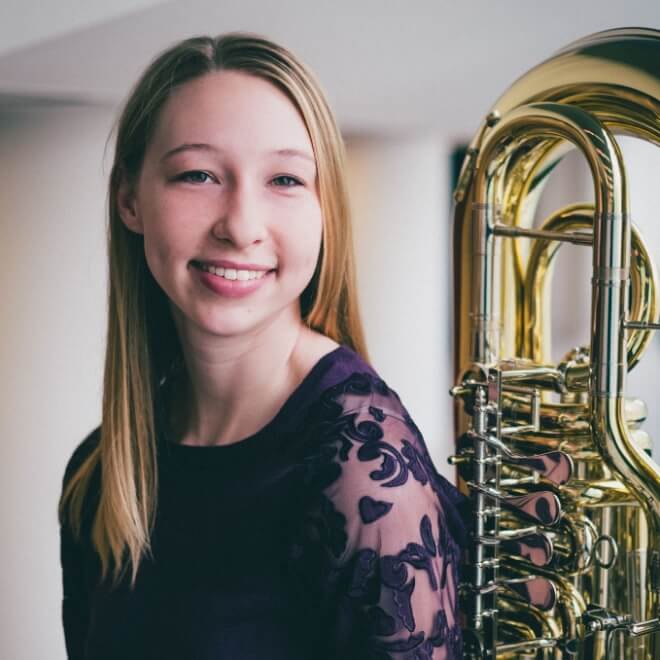 Samantha Lake began her musical career with the study of classical piano at the age of five, and continued to take lessons for 13 years. Unafraid to be different, Ms. Lake chose tuba in sixth grade and never looked back.  Since then, she has been heard in venues as diverse as Carnegie Hall, the MetLife Stadium, and the streets of New Orleans.

While performing tuba in multiple ensembles including the Pierre Monteux Music Festival Orchestra, Charter Oak Brass Band, and Seraph Brass, Ms. Lake has also earned recognition as a soloist. Her passion for solo performances was ignited when she won the Young Artist Solo Competition in New London, CT in 2012, resulting in a solo performance accompanied by the U.S. Coast Guard Band.  In the past few years, she has won the Blue Lake Fine Arts Camp Staff Solo Competition, the University of Connecticut Concerto Competition, and placed second in the Eastern Connecticut Symphony Orchestra Instrumental Competition.

Ms. Lake is from southeastern Connecticut and graduated from the University of Connecticut with a Bachelor of Music degree and studied tuba with Gary Sienkiewicz.  She also graduated with a Master of Music degree from the Juilliard School.  Ms. Lake currently studies and works at Rutgers University, where she continues her studies with Alan Baer in pursuit of a Doctorate of Musical Arts.