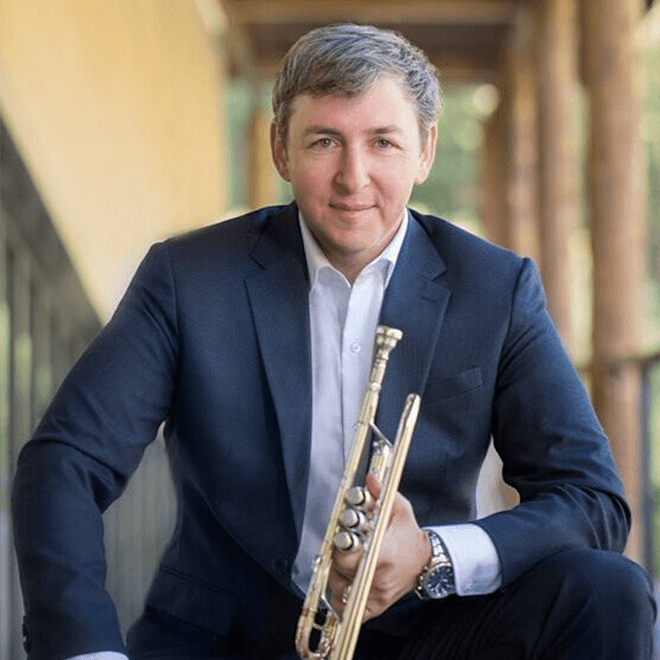 David Krauss joined the Metropolitan Opera Orchestra as principal trumpet in 2001 and occupies the Beth W. and Gary A. Glynn endowed chair. He has performed with James Levine in the MET chamber series at Carnegie Hall and has appeared as guest principal trumpet with the Boston Symphony Orchestra and New York Philharmonic. Prior to joining the Met, he performed with a variety of ensembles in and around New York City including Orchestra of St. Luke’s, the New York Philharmonic, and on several Broadway shows. Krauss co-produced three recordings: Metropolitan Opera Brass; Waltzes, Songs & Festive Scenes; and Sacrae Symphoniae, where he is praised by the American Record Guide both for his “singing tone which is luxurious and inviting” and “effortless handling of difficult runs, trills and soaring tessitura.” A native of Long Island, New York, he earned both bachelor of music and master of music degrees from The Juilliard School as a student of William Vacchiano and Chris Gekker. He also studied trumpet with James Pandolfi and Wynton Marsalis. He is currently trumpet professor at the Mason Gross School of the Arts at Rutgers University and teaches in the precollege division at The Juilliard School. In the summertime, he is the head brass coach and trumpet teacher at the Boston University Tanglewood Institute.