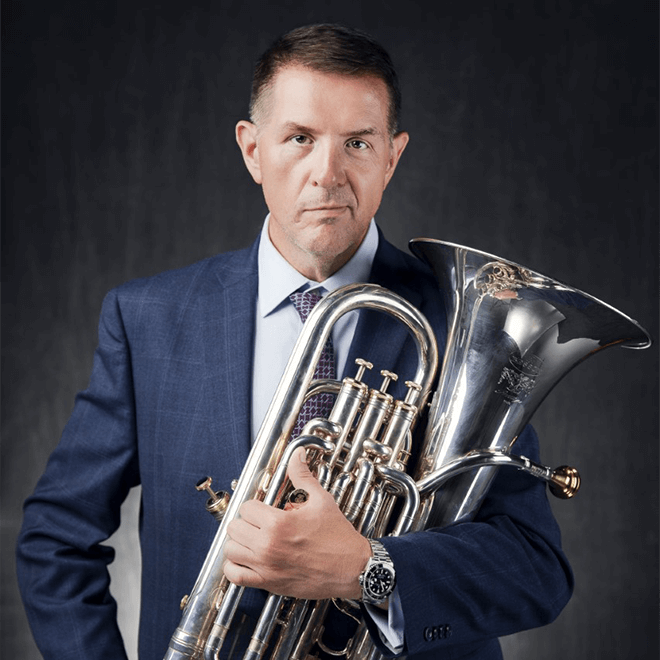 Aaron VanderWeele was appointed Principal Euphonium and Euphonium Soloist of the New York Staff Band in 1993. He currently serves on the faculty of Mason Gross School of the Arts —Rutgers University, The State University of New Jersey.

Mr. VanderWeele is a Fellow of Trinity College London, where he received his FTCL and LTCL Diplomas in Euphonium Performance with distinction.

In 2007, Aaron was awarded International Euphonium Player of the Year —only the third American to receive this prestigious recognition. Mr. VanderWeele has been featured on over twenty recordings, four of which are solo albums. He has solo performances around the world, highlights include solo performances at Royal Albert Hall (London) and The Philips Arena (Atlanta). As a collaborative musician, highlights include concerts with the Canadian Brass, Principal Brass of the New York Philharmonic, and New Jersey Symphony Orchestra. His most memorable performance occurred at Carnegie Hall where he performed with New York Staff Band and Rock & Roll Hall of Fame singer, Elton John.

In March 2020, Mr. VanderWeele was appointed Music Director of the Princeton Brass Band.

He is the proud father of two sons –Evan and Matthew –and loves to mentor musicians in their pursuit of excellence, no matter their age or ability.